Labels: Story
“Stephen Dayashankar is a visual artist who has been taking photographs for over fifteen years. He became interested in photography at the age of sixteen upon seeing the works of Robert Capa and has since devoted his life to creating expressive images.” The announcer’s voice barely registered in his mind. “Why do you want to kill me? We were friends yesterday.” A little boy engulfed in terror. A masked face brimming with anger! He closed his eyes. It made no difference!

The anchor’s words resonated across the audience. “In Stephen’s own words, the language of photography is potent and expanding by the day. Photographs hold infinite power to influence, reform, incite, heal, provoke and cure. The pictures that hold the most power are quite often the ones that are the most devastating.” A sword smeared in warm blood flashed through his mind opening up a wound in his heart.

“Stephen has dedicated his life to mirror people’s lives, echo their sufferings and transmit those emotions to the world. We pruned several hundreds of photographs before selecting his masterpiece for the “Photograph of the Year” award. This picture was not powerful because it was on the front page of newspapers. It is powerful because it is in the minds of the people of this country. Its influence was birthed by the audience and the movement that it spurred.” The voices in his head were getting stronger. “You should not be here Sir. You should leave right now if you want to live.”

“His dramatic capture etched the entire horror of Deogarh into our memory. The small boy running for his life being chased by another young lad clad in saffron will haunt us forever. A blood dripping sword in his hand, his assailant’s masked face conveyed an emotion unlike any other. The small boy’s visage and fate half captured as he runs past a brick wall with the sword inches away from his neck.” The anchor’s chronicle of his photograph sent a shiver down his spine. He could hear a distant wail. A helpless yelp of looming death amidst loud cries of anguish, clanking of swords and disturbing smell of rotten flesh and frozen blood! He closed his ears. It grew louder!

“So without further ado, we present to you the man who inspired us all to rise above communal hatred and work religiously towards bringing down the iron curtain of religion with his poignant photograph: Mr.Stephen Dayashankar.” A headless torso twitched violently trying one last time to hang on to life. Acid smoke engulfed his lungs. A tear droplet made its way out.

“Sir, could you please come forward to receive your award?” The sea of people in front of him metamorphosed into an ocean of corpses and skeletons. One of them slowly limped towards him with one arm extended.“Mr.Stephen… Are you all right?”

He walked out of the auditorium with tears running down his cheeks profusely.

Ravikant Pandey sat at his desk sipping his tea lazily and glanced through a case file rather reluctantly. He thought a few inmates would trickle in but did not expect a visitor.
“You don’t seem from around here. I don’t think you have come to the wrong address either. What do you want?”

“My name is Stephen Dayashankar. I am a photojournalist. I believe you were the Inspector in charge when the riots of Deogarh happened.”

The mention of the riots brought a stark change in Ravikant’s expression. “Your face seemed familiar. Now I know why. What do you want now?”

Stephen ignored the generous sarcasm in the Inspector’s voice. “I want to know what happened to a few people who were entangled in the riots.”

“The ones in your photograph?” Ravikant’s voice was stern.

“Yes. Have you seen it?” Stephen offered a copy. The inspector showed it away.

“Everyone in this country has probably seen your photograph. It is not worth seeing again.”

Stephen was prepared for insults. “Do you know what happened to these kids?”

The lack of emotion in Ravikant’s voice annoyed Stephen. “Probably? Are you not sure?”

Stephen was clearly flustered. “Please don’t be so irresponsible and insensitive to human life.”

Ravikant was nonchalant. “If you see as many deaths as I do, you will be worse.”

Stephen was writhing in anger. “I will probably do something to prevent those deaths. Back to my question: Are both of them dead?”

“I can’t say for sure. Several bodies were mangled so badly that they were completely unrecognizable. But as far as I could tell, Ilyas, the boy who was being chased was most likely killed. There was no way he could have escaped. As for the boy who tried and probably killed him, Neeraj, there is a chance he could have fled the town, though I would give it a very low chance.”

Stephen was not impressed. “Can you give me their addresses?”

Ravikant gave him a sharp glare. “You have done enough already. Can you leave them alone?”

Stephen had had enough. “Look here Inspector. If you want to play hard ball, be my guest. I can make one phone call and you will get one the very next minute from your superiors and then you will be forced to give me the address yourself. I don’t want to that yet. And trust me, I am not here officially. I am here for my own sake. Any conversation I will have with their families will stay and die with me.”

Ravikant grudgingly wrote the addresses on a piece of paper and handed it to Stephen who walked out of the police station in a hurry.

Mustafa was a middle aged man in his late forties. He was tall and well built, walked with a slight limp and had a long half white beard. He seemed quite surprised to see a visitor at his door. He ushered Stephen in. No words were spoken for several minutes. Stephen finally decided to break the silence. “I am here to talk about your son.”

Mustafa remained stoic. “What is left to talk?”

Stephen spoke with a heavy heart. “I had seen his eyes just before they disappeared behind that brick wall. He was pale and terrified. Fear and horror had engulfed him. But I also saw a small glimmer of hope in his eyes. I couldn’t understand that. How can one feel hope in such despair? How can one think about life when death is inches away? Those eyes have haunted me for the past six months. I haven’t been able to sleep. He must have been a special boy.”

Mustafa smiled for the first time. “Extremely! I have not seen a happier child in my life. He was happy with everything. He lived life with abandon. He had a small world. He painted it with smiles. May be God wasn’t happy without him and wanted him back to spread joy in heaven. In a way, I am glad I didn’t see his corpse. I have never seen him without a smile on his face and at least it will stay that way. I can spend the rest of my life with the image of his beaming face emblazoned in my heart.”

Stephen dreaded his next question. “Why are you still here?”

Mustafa had made his peace already. “This is my home. This is my world. I have lived here all my life. These are my people. The people I have known for years. I have spent my life’s best days here, shared happiness and sorrow alike with my friends. What happened that day was unlike this place. It was possessed by some evil spirit. Darkness had consumed us that day. The people who killed were not from here. They came from some wicked place, unleashed terror and slipped into the night, leaving us broken and battered. But they still could not divide us. No one will ever. I will die here knowing that there will be more than four people ready to shoulder me to my grave.”

Stephen decided not to rekindle any more painful memories. “Thank you for talking to me. I can’t offer you any solace but you will be in my prayers every day. I need to talk to some more people. Can you tell me where this address is?”

What Mustafa said sent a shiver down Stephen’s spine. “Oh… they are our neighbors. Wonderful people! Ghanshyam and I have been best friends for the last 20 years. Ilyas and Neeraj were inseparable. But life has played a deadly game with them too. They lost Neeraj that day and have never been the same ever again.”

Labels: Cartoon
A couple of aliens wanted to explore the outer space and somehow landed on Earth. Since we have so much to offer, the aliens had a tough time deciding which place on earth they should visit first. Check out what they decided! 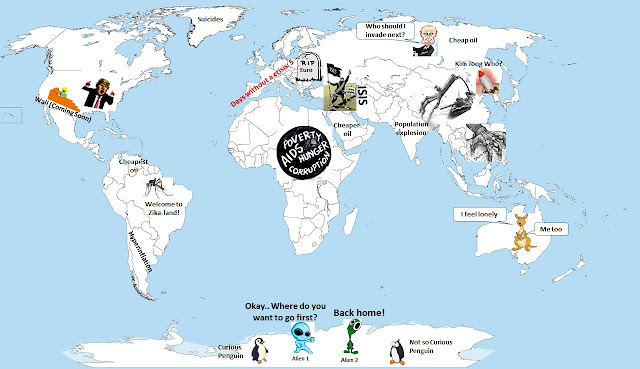 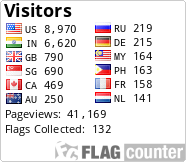